Abell beekeeper Mike Stanley’s beehive swarmed this month. His beehive did well thru the winter and was so healthy this spring that it needed room to expand and split off. He captured the swarm and put the bees into another bee box with brood frames and honey frames. We are optimistic the bees will take to their new home.

Swarming occurs when a colony of honeybees becomes too big and divides into two units. About 30 to 70 percent of the bees remain in the parent colony; the rest leave as a swarm. The bees in the swarm are predominantly workers, but a small fraction may be drones (males). Typically, each swarm has one queen, usually the old one from the parent colony (who is the mother).

Swarms don’t go too far – only a few miles/km from their origin. 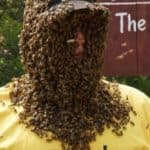 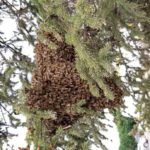